I have read quite a few articles on why Dow Jones is not breaking its new high because on an inflation-adjusted basis, Dow did not exceed its 2000 high. That is all true, except on a the basis of technical analysis, I do not take such argument using inflation-adjusted curves. Technical analysis is rooted in human psychology, and human psychology on the numbers does NOT adjust price by what inflation has transpired. Therefore, I believe the fact that Dow Jones broke its 2000 high is significant by itself.

But does that mean that the secular bear market is coming to an end? NO, not at all. Definitely not because of Dow Jones breaking new high, the secular bear market comes to an end. The most difficult question is which market index really represent the US market. Defining what the Market is is quite important from the perspective of asset allocation. At least according to Efficient Market Hypothesis, you should put your money according to the capitalization weighted percentage for every component. But what is an US stock market? Again, it cannot be represented by just 30 stocks which are not capitalization-weighted.

Most people would say that either NASDAQ compositie index or S&P 500 are a good representation of the market, both of which are capitalization weighted. This I tend to agree. Both major indexes have not broken any new highs yet, especially NASDAQ which is still way under the 2000 peak. But probably a better index for the US market is the Wilshire 5000 or Russell 3000 index which represents close to 98% of all market capitalization, weighted based on capitalization. Both of the index have not broken any new highs either, but they are indeed quite close to the old peak. Wilshire 5000 had its peak back in 1999. 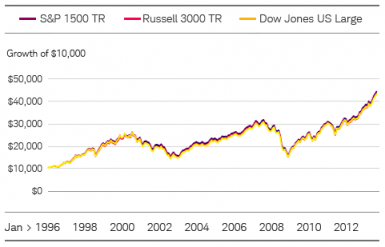 My personal opinion is that dividends are cash distributed, and definitely for the purpose of portfolio balancing, you would not use the Russell 3000 value including the dividends. For the purpose of determining whether the index has broken a high, I tend to say that you should not include the dividends for the same previous reason. But for what it’s worth, you should be aware that the current high in the stock market is indeed quite amazing and slightly frothy too. In fact, if you look at the sub-components of Russell 3000, more specifically the small cap stocks of Russell 2000 (2000 smaller companies in Russell 3000), the small cap has broken new high noticeably. (Another reason to make sure your portfolio has small cap stocks weighting. History speaks up once more. Small caps outperforms.) 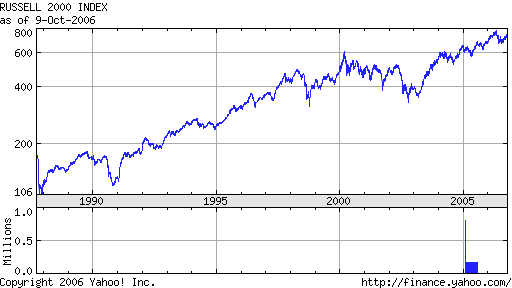 Although I’m still bullish on this market (in fact, if you follow my blog, you will see that I’ve put my own money into market and called at least 4 times for bulls since 8/16), I will be very cautious of chasing the market here. But the fact that there are quite many more bears around this time, it probably will make any dips to be shallow. I believe that the stock market will exhaust its momentum sometimes closer to the end of October to November. The dip may be slightly big, but it will make a big push towards next February to set up an even bigger fall. I have not made up my mind for 2007 to 2009, but temporarily, I am in the goldilock camp of a soft landing in housing market (but just for 2 more years) due to all the Fed’s printing press (of money). Soft landing would be quite unbelievable for all the bears. Yet the market can stay high longer than the bears can stay solvent. Certainly, the market likes to make the market high and long enough to squeeze all the shorts, while bringing on more and more last minute longs to make the final killing. This is always the norm, not the exception. Market overall will reduce the average return of all participants.

If you are interested in studying indexes for your asset allocation, here are a list of all US stock indexes directly from Nasdaq. ML is running an asset allocation series, and my advice for investing $10K to $100K is asset allocation. Try to learn as much as you can, and if you have time, you should definitely read the two books (Four Pillars and Intelligent Asset Allocator) listed in my advice page above.

The bear market seems to be over at the newstand. But let us come back to look at the truth after next January. It may be very interesting. Possibly market will present us another puzzle like with and without dividends for Russell 3000: will it be a new record high for the beginning of a secular bull market, or a new record high for the double top setup? Maybe it will be a cup and a handle. Who knows?