In Part 1 I laid out the basic question we’re trying to address:

Since the money inside a 529 plan grows tax-free, is there a break-even point, beyond which it’s more advantageous to invest in a 529 plan than in a regular taxable account even after paying penalty.

I showed that the tax advantage of 529 plans are indeed sufficient to overcome the plan costs and given time would overcome the adverse tax treatment and penalties for nonqualified withdrawals, albeit after 30 years or more in most instances. In addition, it should be understood that higher current tax bracket and lower fees will tilt things more towards 529 plans, while tax-efficient investments in taxable accounts will tilt things the other way.

Dimensional Fund Advisors (DFA)
For reasons that will soon become apparent, we enrolled in West Virginia’s Smart529 Select plan last year. We did this before the birth of our daughter to take advantage of my state’s recent tax law change to allow a deduction for contribution to an out-of-state plan. One key reason for selecting the particular plan was its use of DFA funds.

DFA funds are backed by research done by Nobel laureates in economics. I first learned of them via Paul Merriman and Index Fund Advisors (IFA). They are probably the best index fund managers, only Vanguard comes close. Altruist Financial Advisors has a great comparison chart that I think every do-it-yourself asset allocators should study. Unfortunately, there is a catch. DFA funds are only available through financial advisors who normally charge a fee for assets under management. If you are lucky enough to have a million dollar portfolio, consider Evanson Asset Management who charges a flat $2000 fee, or 0.2%, which is among the lowest that I’m aware of. A more realistic choice for me personally is IFA, which caters to account sizes of $100k and up. Their fee is 0.9% for the lowest tier.

In comparison, West Virginia’s Smart529 Select plan that gets you into DFA funds at an annual expense rate of 0.55% must be considered a bargain. I ran the same calculation as before but the 529 plan now enjoys a 0.35% advantage in fees in addition to the tax savings. The results are quite different. 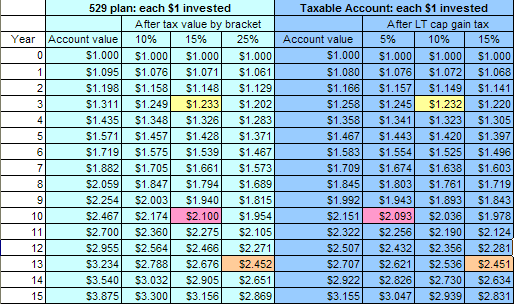 Qualified Educational Expenses
Even though the examples I have given so far have shown 529 plans to have the potential to be a stand along retirement savings vehicle, they are best used as intended, that is, for qualified education expenses. IRS defines these expenses as

… the tuition, fees, books, supplies, and equipment required for enrollment or attendance at an eligible educational institution (defined in the next column). They also include the reasonable costs of room and board for a designated beneficiary who is at least a half-time student.

When used for qualified educational expenses, the 529 plan is almost as good as a Roth IRA: there is an extra plan expense, off-set in part by possible state tax deductions. Many people plan on taking college courses in early retirement. As a matter of fact, numerous college towns around the country consistently rank as the best retirement destinations, so the 529 plan will come in handy then.

When the qualified education expense is reduced by a scholarship or fellowship, the earnings are taxable, but not subject to the 10% penalty. In this situation, the 529 plan acts like a non-deductible IRA. Unlike retirement plans, losses in the 529 plans are deductible, but subject to the 2% of AGI limit on Schedule A.

Rollover and Transfer of Designated Beneficiary
The 529 plan owns much of its flexibility to the freedom to rollover the plan or change the designated beneficiary to a family member of the old beneficiary. For this purpose, a “family member” is defined as

This is a far-reaching list, especially since multiple rollover/re-designation of beneficiary is possible (limited to one per 12 months in some cases). Assets within a plan can be used to pay for the education of your children and the excess amount can be left to the generation after. It is certainly possible for one to pay for the education of a family member out of the 529 plan for a return payment as a way to sidestep the ordinary income tax and 10% penalty. These possibilities make the 529 plan an excellent multi-generational planning tool.

One point of note: many financial planners advocate the grandparents (of the student) be the owner of the 529 plan because the assets of the parents count against the student in many formulas used to calculate financial aid. For the same reason, it’s usually not a good idea for the student to be the owner of the 529 plan. With proper planning, gift tax for skip-generation contributions should not represent a problem.

Implications for Investment Choices within the 529 Plan
I’m currently the beneficiary of the newly-opened 529 plan. The intention is, of course, to switch over to my daughter later. I have all the money in the most aggressive (all equity) option. Chances are the money will be there for a while.

Most 529 plans feature age-based portfolios which are similar to target retirement funds that increase the fixed income portion as the target date approaches. The rational is that return expectations should be sacrificed for shielding from untimely market declines. One cannot argue with that logic if the 529 plan is established to pay for the education of a single beneficiary. However, when the 529 plan is viewed as a multi-generational planning tool, its time horizon is easily 20-30 years longer, so that the investments can be left in the most aggressive option, where the expected return is the highest, for much longer.

To compensate for the extra volatility, I will increase my contributions slightly (perhaps10-20%) above originally planned. This will likely result in an account value exceeding the educational expenses for one person down the road, but as I have demonstrated above, this is not a bad thing after all.

I originally planned for a 2-part series; however, one reader raised an interesting question of comparison to a variable annuity. I’ll try to address that in part 3 along with the asset protection feature of 529 plans.