This last point is what I want to address today. Two blog entries at MyPocketChange and RetireEarly started exploring this question:

Since the money inside a 529 plan grows tax-free, is there a break-even point, beyond which it’s more advantageous to invest in a 529 plan than in a regular taxable account even after paying the penalty?

Essentially, the interlocutor is asking whether the 529 plan can function as a stand alone retirement savings plan without contribution limits. This can be calculated quite easily if we make certain assumptions about the rate of return, current and future tax bracket, etc. But to gain a better understanding, let me rephrase the requirement into two separate conditions.

A. In each given year, the advantage of tax-free compounding must out-weigh the extra expenses for the 529 plan, viz.

Where R is the return; ER is the expense ratio; and TR is the tax expense for the taxable account. If this condition fails to hold, then compounding will only make things worse.

The current tax expense, TRtaxable, is given by,

Where D is the distribution rate; STportion and LTportion are the fraction of D that are short term gains or long term gains and dividends; STrate and LTrate are the current applicable short and long term marginal tax rates. D also includes any gains realized for rebalancing.

Assuming the 529 plan has a wide enough choice such that R529 and Rtaxable are equal, you can tilt things in 529 plan’s favor by choosing a plan with low fees, choosing investments with high distribution rates and be in a high current income bracket.

B. The second condition is that you have to wait long enough for the money in the 529 plans to grow enough to offset the tax penalty.

Where P is the portfolio value; MR529 is 10% + future bracket; MRtaxable is the future long term cap gain rate. Again for things to be in 529 plan’s favor, you have to wait long enough and withdraw the money when your future tax bracket is as low as possible; or to be more exact, when the differential between MR529 and MRtaxable is as small as possible.

Putting the numbers together
Since no one can predict future tax law changes, an exact analysis is not possible. For example, it’s highly debatable whether the current low capital gains and dividend tax rates will be extended after they sun-set in 2010. The best we can do is to take the current tax rates and make reasonable projections into the future. My assumptions are as follows:

Distributions and gains realized for rebalancing as a percent of the portfolio: 6%
– Of which are long term capital gains or dividends: 75%
– Of which are short term capital gains: 25%
TRtaxable: 1.14% (This is the amount of annual taxes to be paid from the taxable account. Since this is greater than the 0.6% expense rate of the 529 plan, condition A is satisfied. Given time the 529 plan will overcome the extra tax burden at liquidation.)

The output is in the table below. For each dollar invested in year 0, I computed the after tax (and penalty) liquidation value of the accounts as a function of the respective future tax rates and number of years invested. Some rows were hidden to make the table smaller. 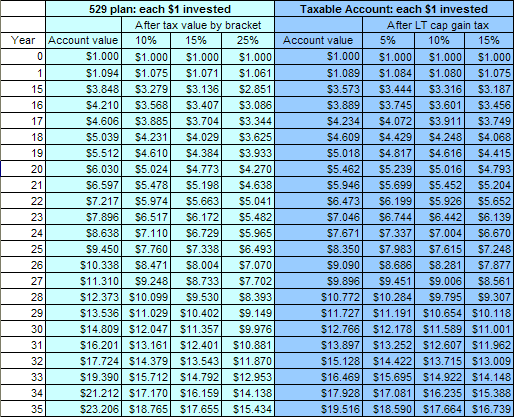 At this point, you’re probably thinking, “Why bother!” Indeed, 401(k), Roth IRA or the traditional IRA, even the non-deductible kind are much better ways to save for retirement. It is only after those have been maxed out, does the 529 plan emerge as a potential alternative. As described so far, it’s applicable to only a very small segment of the population with high disposable income or a lump sum to invest early on.

If the story ends here, this would not have been a useful exercise. Fortunately, there is much more, both in terms of the 529 vs. taxable plan comparisons and ways of utilizing the 529 for qualified educational expenses thus avoiding the 10% penalty. Please stay tuned for Part 2!