In Counter currents in the market, I postulated upon a bear capitulation based on the resilience of major indices and the Dow Transports making a new high (a Dow Theory confirmation signal). No such capitulation came. Instead, the market wondered aimlessly with compressed volatility for several sessions. Then came the sub-prime debacle at HSBC and New Century (brief summary). The stress in the sub-prime market was well known, even I mentioned it in Counter currents in the market, yet the market still seemed surprised by how bad the news was. So is the market really efficient? Something to ponder. Anyhow, even though I was shorting home builders and mortgage lenders on and off, I wasn’t positioned for this implosion. I suppose I had a little too much trust in the market.

It’s doubly interesting to note that the market was once again on the ropes today and was able to pull through on the back of an acquisition rumor of Dow member Alcoa by either BHP Billiton or Rio Tinto for $40B or a 33% premium based on Tuesday’s closing price. I can just see the bears pulling their hairs out as everything they’ve been saying about the housing sector are being vindicated and the market still merrily chugs along. For this reason, I’m still expecting a capitulation top. After that, we can start talking about a market correction of some depth.

I haven’t owned any base metal miners since last May. As can be expected, the whole sector got a lift from the AA rumor today. I took the opportunity to purchase some Teck Cominco (TCK) in part based on its nice looking technical setup. It closed at $74.23 during regular hours and clocked in at $75.80 in after hours trading. This is well above the 50 dma at $73.06 and the upper boundary of the triangle. Moreover, momentum indicators are all pointing up. 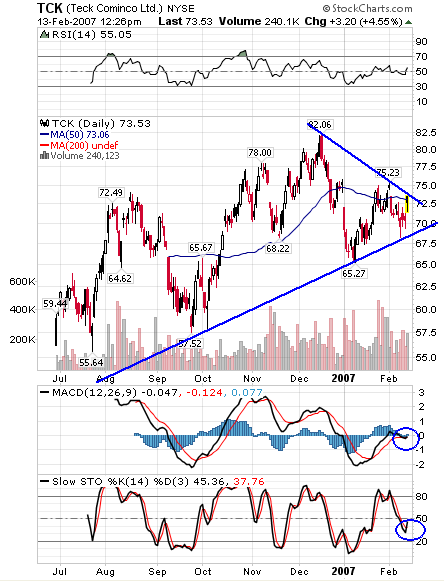 The AA buyout rumor is a continuation of a torrent of M&A activities in the base metal mining sector. Not too long ago, TCK tried inviting itself to the courtship dance between Inco, Falconbridge with Xstrata also butting in. Inco completed the merger with Falconbridge only to be gobbled up later by CRVD. TCK has a market cap of $16B as of Tuesday. Compared with BHP Billiton (BHP, $133.6B), Rio Tinto (RTP, $71B), CRVD (RIO, $84.5B), Freeport McMoRan (FCX, $11.1B to complete purchase of Phelps Dodge, $25.3B), and Xstrata (~$45B), its figure is decidedly slim in an industry where size is a prerequisite for survival. Will it finally don the pretty white dress? I keep my fingers crossed.