The last time we looked at the oil chart was in a post about CanRoys. At the time, there were plenty of oil bears on CNBC predicting $20-30 oil, but I was pretty sure that $50 was going to hold. Fast forward two months, oil’s back up to $63 a barrel. The talking heads would again have you believe that geopolitical tension is the sole cause while completely glossing over the fact that the rebound started long before this latest Iranian incident. 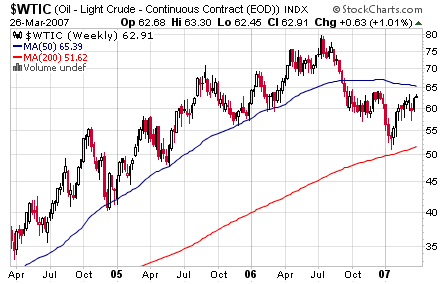 Personally I cringe every time I hear geopolitical events being used as an excuse for price increases, be it oil or gold or anything else. What’s usually left unsaid is that the prices invariably fall as such events subside. Except that quite often the prices don’t fall as much as they rise… While Iran may have contributed a couple of dollars to the oil price, there are greater forces at work. I’ll show a couple quick charts and links and leave you to make your own conclusions.

The first is Saudi oil output in the past five years. The data from four different sources were averaged to produce the black line. Over 2006, Saudi production declined from 9.4 MM bpd to just above 8.5 MM bpd. The full article can be found at the OilDrum. 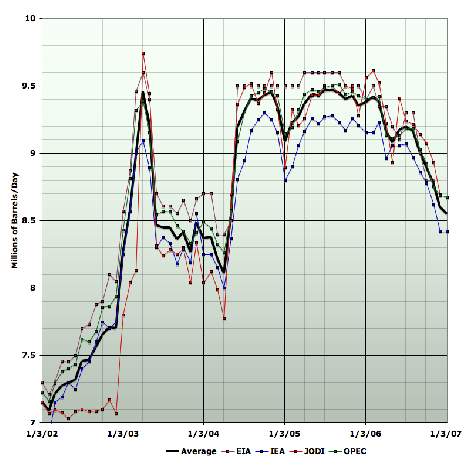 The next chart is the Baker Hughes oil rig count for Saudi Arabia. The data is only up to early 2006. The rig count increased drastically in 2005, with no apparent corresponding increase in output. So it would seem that the new wells replaced declining production elsewhere, or Saudi Aramco embarked on a massive exploration program, or both. Oil price peaked in July 06, but other than a small supply bump in the middle of the year, Saudi production was a straight line down in 2006. 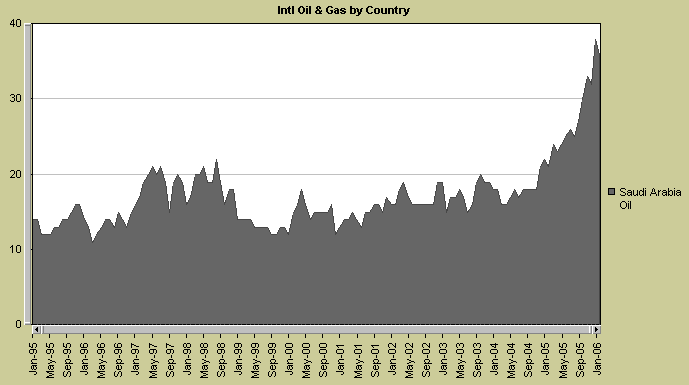 Was the reduction in Saudi oil output by choice or due to production limitations? I leave you to ponder that question. By the way, if you haven’t read Matt Simmons’ Twilight in the desert, now would be an excellent time.

Caveat: This is a look at the long term supply of crude oil, not a short term call to buy oil or oil stocks. As a matter of fact, I think oil will likely move down in the short term to form the right shoulder of an inverse H&S formation. If concerns about world economic growth emerge then $WTIC may retest the lows at $50. It would be a grand buying opportunity if were to happen.