By lottery ticket I’m talking about lowly priced, speculative stocks with great potential; rather than actually trying your luck at the latest Powerball or the Big Game, although I’ve been known to do that too! In the investing game my lottery ticket is (surprise, surprise) a junior silver exploration company, Excellon Resources. It trades in Canada under the symbol EXN.V and in the US on the pink sheets under the symbol EXLLF. [See here for a discussion on pink sheets.]

I won’t belabor the bull case for silver. Instead, this post will be a fairly in-depth (for me anyway) look at the fundamentals of this company with some technical considerations thrown in at the end.

Background
Excellon’s claim to fame is its Platosa property in northeastern Durango State, Mexico. Mexico has one of the friendliest legal environment for mining companies. Given the victory of Felipe Calderón over the leftist López Obrador last year, this situation is expected to continue. Platosa is located down the Eastern slope of the Sierra Madres, along the famous Mexican CRD (carbonate replace deposits) belt where many massive silver/zinc/lead/copper mines have been found.

Extremely high ore grades
The Platosa property is characterized by its extremely high ore grade. The company presentation (PDF) shows mineralization of 50 oz/t for silver and around 10% for both lead and zinc. I just about fell off my chair when I first saw these numbers which are so high that a quarter to a tenth of them may make somebody else’s flagship property.

On the other hand, this highly concentrated ore body is not great in extent which I guess is nature’s way of evening things out. The NI43-101 (a Canadian standard for reporting reserves and recourse for mining companies) conforming report prepared in August 2006 shows only 184,500 tons of resource, although if more recent discoveries were included, the total would like be around 350,000 tons. This is miniscule compared with the 5-50 million tons that a large scale CRD could contain.

The high grade ore does allow even a small scale test mining to be profitable. This is precisely what the company has been doing for the past two quarters: generating positive cash flow from test mining to self-finance its exploration activities. For now, Excellon needs to deliver half of the silver it mines to satisfy a silver backed debenture. Its bottom line will improve significantly when the debenture matures this July.

The company currently has 146 million shares outstanding at approximately US$1.20 each which gives it a market cap of US$175 million. It also has 13 millions options outstanding.

Intrinsic value
The intrinsic mineral value can be calculated from the resource amount, mineralization level and valuation for metal-in-the-ground as outlined in the table below. My assumption of $5/oz for silver, $0.25/lb for lead and $0.40/lb for zinc was fairly conservative. A smaller silver concentration than the company currently claim was assumed. I arrived at an intrinsic value of US$114 million, or 65% of the current market cap.

Income model
The picture is rosier when one considers the potential income after retiring the silver debenture. Using the annual tonnage, ore grade and recovery rate contained in the most recent report, it’s reasonable to expect the company to generate US$26 million in the first year based on current metal prices.

If the company were to cease exploration altogether and concentrate on its small scale mine activities, there may be six years of mine life left. Using US$26 million as a baseline and a discount rate of 12% and growth rate of 15% (both are subject to debate of course) the DCF model gives a present value of US$163.5 million, which is close to the current market cap of US$175 million. 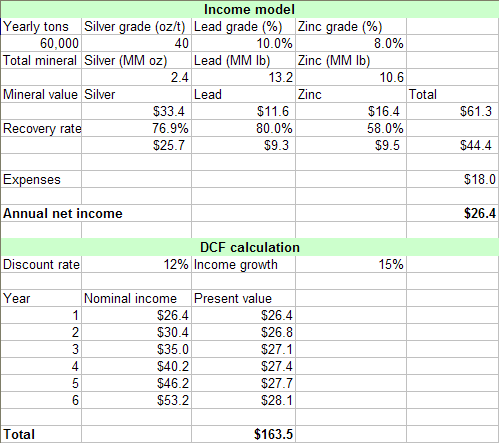 Latest quarterly report
Excellon’s stock price was temporarily depressed following the latest earnings announcement where the bottom line number was a measly $216k, a big let-down form the $7+ million in the prior quarter. However, over $2 million was an accounting artifact due to the re-valuation of the silver debenture. In addition, there was some operation problems at the mill that reduced the amount of ore processed in the quarter. The company further stated that they encountered an unexpected mineralized zone while constructing an access ramp. Rather than letting the ore going to waste it was processed and resulted in a drop in the overall ore grade for the quarter. It seems one can’t avoid hitting something when digging in this place!

The technical picture
The weekly chart shows that Excellon has consolidated along the top rail of a large triangle that it broke out from at the end of 2006. The daily chart shows a “W” formation off the strong support at C$1.25-1.27. Short term momentum indicators are pointing up. 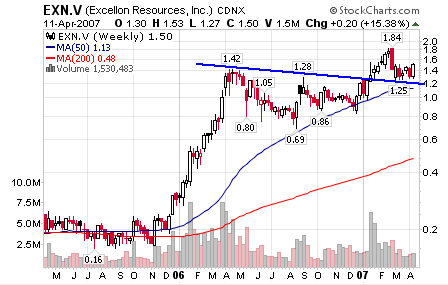 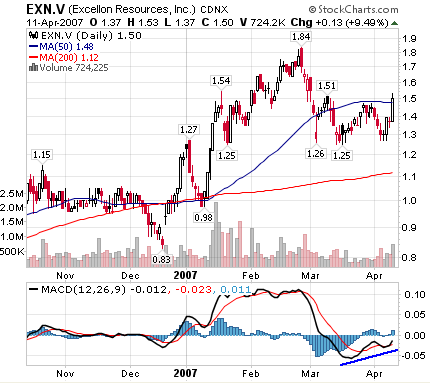 Conclusion
Much of this article was written prior to Wednesday, April 11 when the stock jumped over 9% following a new drilling announcement, although I would have to say the content of the announcement was very much expected if one actually paid attention to the map of the property and previous drilling results. I believe my analysis above still stands.

In summary, Excellon is a profitable, exploration company – a combination that is exceedingly rare. Naturally, the stock is leveraged to metal prices, but the real jackpot potential lies in the possibility of discovering a large CRD in the vicinity of its Platosa mine. According to my DCF model, current valuation is largely supported by the test mining activities alone; therefore, investors are getting a near “free ride” on Excellon’s exploration potential.

Disclosure: I own this stock. My “lottery ticket” analogy was meant to highlight the speculative nature of this stock: just like any lottery game, the jackpot may be huge, but payout is far from guaranteed.