Here is some of the latest real estate headline news:

3. New Century goes bankrupt, slimming down from 6000+ employees down to 100+ people, right at Irvine, Orange county, the center of the mortgage fraud so to speak (Impac, Ameriquest, Resmae, Option One are all here).

4. California new home sales down 37% on an annual basis. Slowest total March sale since 1997. You got to remember one thing that if the absolute number of sale is worst than 1997, it is actually much worse than 1997. In these 10 years, California has been growing population at about 1.5% annually. Normalizing the real estate sale by population, the sale would actually be 14% worse.

I have been saying that the bottom of the bubble zone of real estate won’t come until after 2009/2010, which I have arrived by adding 5 years (before negative ARM gets fully amortized) to 2004/2005, plus 1 extra year of time delay for a home to go through the entire foreclosure process. Jim Puplava said in his online radio that he expects the bottom to come at about mid-2008. I personally think that real estate market is still in the denial stage, where sellers are not willing to drop price. That attitude will really take time to change, until the home owner/mortgage holders get burned through monthly negative cashflow for an extended period like 1 to 2 years. If the amount of price drop is more than 2 years worth of the negative cashflow, sellers are more likely to hold out than cutting price. 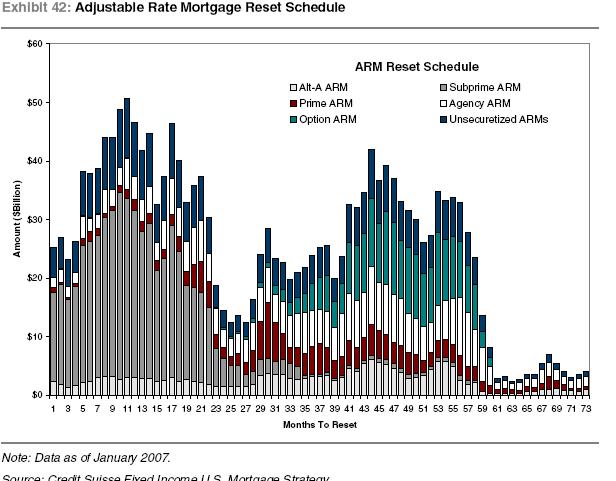 I didn’t need a chart to convince myself, but above (click to enlarge) is the mortgage resetting “map” going forward. As you can see, the subprime mortgages are not flushed out yet and coming to reset in volume later this year. The next bigger wave is the 5-year period from the loan origination, which will come in 2010 through 2012 for the option ARM. If you use 9 to 12 months for the foreclosure process, the real estate market is likely to have a small break in 2010 before getting hit by mortgage reset again.

I think that the only way to stop the housing deflation is through inflation of everything else. I expect the real inflation (not the one published by government to stay above normal for an extended period.