Since the Chinese stock market has grabbed so many headlines recently, I thought I’d weigh in. First of all, recall that I wrote about $SSEC in early 2006 and was quite adamant that it had double bottomed at 1000 the year earlier. That was a time that no one wanted to touch Chinese stocks, particularly people in China. How much things have changed!

Today we have not shortage of people calling the bubble in China, while I don’t dispute the price rise has been nothing short of meteoric, and we may indeed have witnessed a 5th wave blow-off top. Nonetheless, it’s interesting to point out that we call other people’s bubbles far more readily than our own. According to Roubini, the P/E of the Chinese market has reached 50. I have been trying to find the P/E of the Nikkei at its peak, but that data has proved elusive. I have so far found one reference that the average bank stock P/E was 60 at the time! Triple digit P/Es were also common. This is not to say that the Chinese stock market has a lot further to go, but rather that it’s iffy to call a peak based on the P/E ratio, especially before it happens

The Chinese government is trying to curb excesses, most recently by increasing the stamp tax to 0.3% from 0.1%. The increase is insignificant but sends a clear message that it intends to curb speculation. In the end, the Chinese government always has the option to release official shares which was a big reason behind the market down turn in 2002-5 (see the first chart which was drawn in Jan 06). However, I believe it won’t be a step taken lightly. IMO, the issue with China is the non-convertibility of its currency and consequent lack of outlet for people’s vast savings. 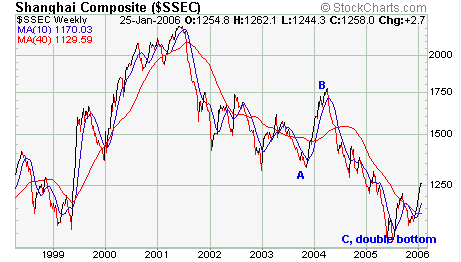 Since few individual investors buy shares in Shanghai, the more pertinent question is how will a large drop in the Chinese stock market impact the rest of the world, given the size and open nature of the Chinese economy. I’m an optimist in that regard in that I believe a large drop tomorrow (say 30%) will not have much impact on even the domestic Chinese economy. It follows naturally that commodity should demand will remain robust.

Here’s my reasoning: Bubbles wreak havoc because it distorts price information which is the best feedback mechanism in a free economy for resource allocation. However, for mal-investments like the dot com’s of 1999-2000 and Miami condos in 2005 to take hold, new investment decisions must be made based on the elevated asset prices and the bubble must persist for some time. Neither of these elements is present in China. First of all, most listed companies are state owned enterprises and listing is very much a political process. Consequently, small to medium sized non-state own enterprises that are the most vital parts of the economy cannot raise capital in the stock market. On top of that China has only a nascent VC sector and they are not rushing to give money away. Secondly, if the bubble burst tomorrow, it would have lasted less than two years from deeply oversold levels. Not enough time to do lasting damage. There isn’t a mechanism in China to borrow against appreciated securities which is how many Japanese companies got into trouble. After all, without new issues, a stock market is merely a wealth transfer mechanism. Those few individuals who mortgaged their house to speculate on shares may be hurt and the reverse “wealth effect” may curtailed some spending, but I don’t see a lasting effect on the economy as a whole.

The corollary of the above is that there’s a good chance the Chinese stock bubble will continue and cause more problem when it finally bursts. There is a chance that the bursting will be a positive for gold as people look for the next speculation target. One should never underestimate Chinese people’s propensity to gamble.

As I finish this up Sunday evening, $SSEC is down over 7% to 3700 (roughly where the trend line is) at one point but has recovered to down only 4% or so. Recall that at the end of February, a 9+% drop there initiated a mini-crash in the rest of the world. Last Wednesday’s 6+% drop dragged down Asian and European markets across the board but US markets reversed higher nicely. Tonight, most Asian markets are up in the wake of the turmoil in Shanghai. It seems people are realizing the Chinese market for what it is: an isolated casino that matters little to its own economy, much less the rest of the world’s. 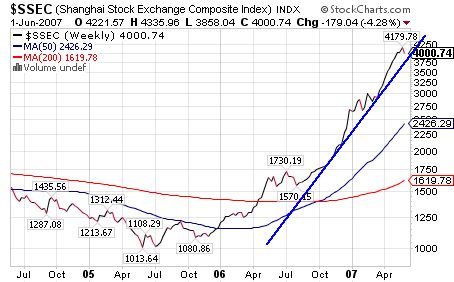