I’m still trying to make sense out of last the stock market decline last week and the bounce on Friday. Clearly global interest rates are on the rise; and the 10 year, in particular, took it on the chin. Its yield broke above a decade plus trend (link).

That China has announced its intention to not recycling its trade surplus into US treasuries as readily may be an indication of a long term shift in the treasury market (related link). Medium term, consumption in the US is on the wane due to declining mortgage equity withdrawal. The trade deficit is improving as a consequence. Paradoxically it also means our trading partners have less demand for treasuries. As a near term catalyst, Paul Kasriel of Northern Trust pointed to the most recent Fed custody holdings which showed a relatively large $12.5 billion reduction in the previous week.

Seeing that a rate cut may not arrive later this year in the best case (or the worst case depending on your point of view), and even if the Fed cuts, the yield curve can further steepen, only 20% is allocated to bonds in my re-worked asset allocation/passive portfolio. In addition to high quality, short term bond funds, I’m adding some floating rate, loan participation funds that I mentioned in passing in my article on closed end funds. Tim Middleton at MSN Money wrote about these types of mutual funds very recently. FFRHX (1 yr total return 7.16%) which was mentioned is actually the fund I own through my solo 401k account at Fidelity. I won’t go crazy with these funds since default risk goes hand in hand with high yields. So this is in effect a bet that higher rates now won’t plunge us into a severe recession.

Stock Market
I have iterated numerous times that I anticipate a housing-led slow down, but how the market will react is altogether another question. The daily chart on the S&P shows another short term trend line broken but the index took a stand at the 50 dma on Friday. In the weekly chart, the trend line is very much intact. The CBOE put/call ratio showed a big spike last Thursday, but we are still ways from the capitulatory levels seen in Feburary/March, so a little more down side is to be expected. 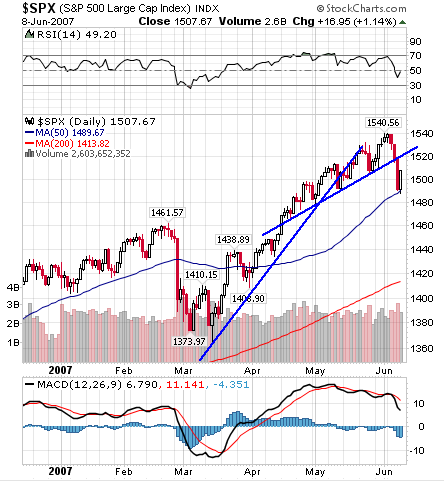 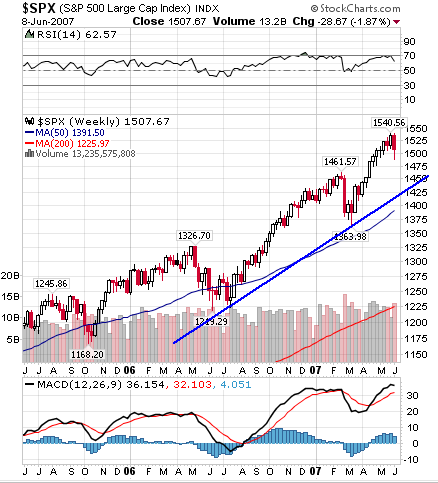 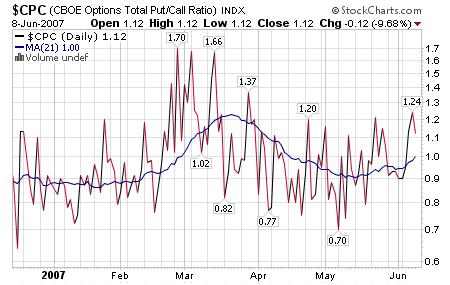 On the other hand, this market has shown too much resilience at the most critical junctures, so I’m not ready to go short yet. My current plan is to wait for the next leg down and see what kind of divergences, if any, reveal themselves.

PMs
I was far from the only one noticing the recent break out in PMs and PM stocks. Alas, money is not so easily made! The one characteristic of a bull market is to throw off as many people along the way as possible! After a couple days of reasonable relative strength, PM stocks went back to their old way of doubling to tripling losses in the general indices. As seen in the chart below, HUI briefly wend below the down trend line that it broke out from not too long ago. GDX, the ETF that tries to replicate HUI, has more clearly broken below its trend line.
I’m not letting these developments affect my core PM holdings which I still believe is in a secular bull market. But many johny-came-lately’s apparently has abandoned ship as GDX temporarily dipped below its recent low of $37.50 on Friday. Just to add another mildly useful indicator, the put/call ratio on XAU also spiked above 3 on Thursday which points to higher PM equity prices ahead. 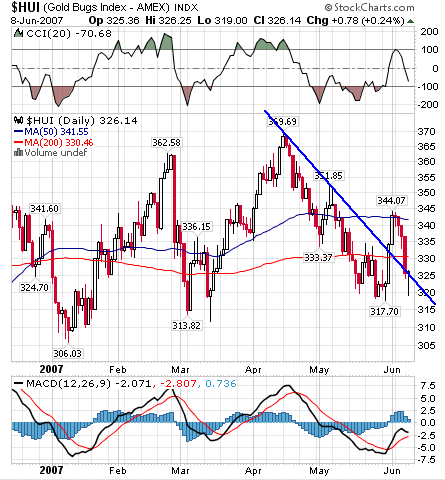 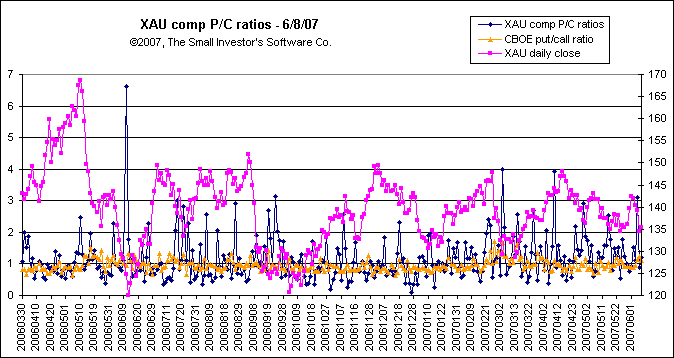 I have consistently said that I’ll let the market tell me when it pays attention to evidence of a slowing economy. My ears perked up last Thursday, but as the rebound on Friday showed, we are not going anywhere in a straight line. Even if we go into a meaning correction/bear market from here, it’ll be a lengthy topping process. And if we do go to new highs, I intend to milk the last drop.