I watched quite a bit of CNBC last week. Among other things, I caught the interview with Countrywide’s Angelo Mozilo who called for a recession in no uncertain terms. This of course, is the man who had steadfastly defended CFC’s business while cashing out some $250 million of options in the past year. Nonetheless, the CNBC anchors all went ga ga over this comment and actually put up several economists/strategists of the more pessimistic bend. Long time readers know that I have long held the same view; however, the very fact that the “R” word is mentioned on CNBC about once every 10 minutes may well mean that a short term bottom is in. Sure enough, Friday saw some nice upside action following a strong durable goods report.

While I remain suspicious American consumer’s continuing willingness/ability to pile on debt, I give more credence to the other leg the bulls stand on: strong global growth. Nowhere is this more evident than in China. The Shanghai stock market made consecutive new highs last week to end at 5108. Again recall that not too long ago the ubiquitous worry was for an implosion in the China to bring down global markets. The fact is, since the July 19th peak in US and the rest of world markets, SSEC has gained over 25%. On Friday, FXI, the FTSE/Xinhua 25 ETF, also made a new high, finally confirming the move in Shanghai. 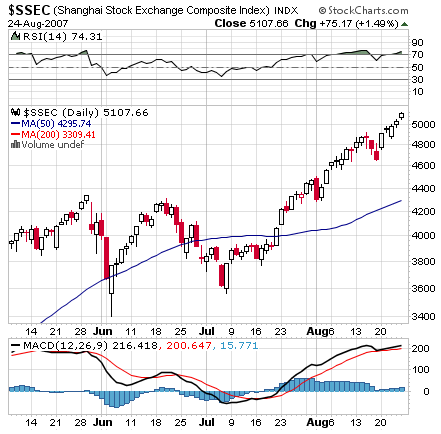 Let me clarify my view on the Chinese market. Many have compared it to the Nasdaq bubble based on price trajectory alone. I will not debate that point. I will even grant that the Chinese market is in a bubble. But in my opinion, that misses the point entirely. Bubbles are grand money making opportunities, during both the expansion and implosion phases if you know which side of the market you’re on! So let’s put emotions aside and look at some relevant recent developments.

First of all, let’s look at some negative factors.

The intriguing thing is that all these happened prior to last week where the Shanghai market had five consecutive up days. You can chalk it up to irrationality but the price action is to be respected nonetheless. In a way, it shows the power of liquidity since Chinese citizens are still pouring money stocks. Let’s now look a few positive factors.

Despite new highs in SSEC as well as a clear non-correlation between Shanghai and the rest of global markets investor continue to shun Chinese stocks as indicated by the growing discount in the MS A shares closed-end fund (CAF) that now stands at 20%. For whatever it’s worth, my own view is that aside from the threat of a weak Christmas shopping season in the US, the prospects remain rosy until the Olympics next August.

Disclosure: I own FXI and CAF.