The best way to learn about something is to see it in action. In this article, I’ll examine the performance of a simple all-ETF portfolio that is actually a part of my wife’s account at Scottrade. I convinced her to devote $30k to this portfolio in September of last year and have been tracking its performance monthly.

The portfolio follows a simple buy-and-hold allocation plan from Paul Merriman (scroll down to the bottom of the page to see an updated version). When the portfolio was implemented the Merriman portfolio consisted of 8 ETFs, 4 for the domestic market (SPY, S&P index, large blend; IWD, Russell 1000 value, large value; IWN, Russell 2000 value, small value; and IWC, Russell microcap, small blend), 2 for the foreign market (EFA, foreign developed markets; and EEM, emerging markets) and 2 for bonds (AGG, total bond; and SHY, short term treasuries). I replaced SPY with RSP, the equal weight S&P 500 index that had a better record which I will discuss in a future post. Merriman’s consertive 60/40 split for stocks/bonds was preserved. Furthermore, the equity portion is equally devided between domestic and foreign markets.

Referring back to the Morning Star style boxes shown in the previous post. The four boxes were covered nicely by the 4 ETFs for the domestic market, and a weighting of 7.5% was assigned to each of them. At the time, ETFs for the foreign markets were not nearly as specialized as for the domestic market; hence one single fund, EFA, was used to cover all four boxes for the foreign developed markets which is why EFA was assigned 24% to EEM’s 6%. As new ETFs appear almost weekly, more precise implementation becomes possible. For example, Merriman’s current model portfolio includes EFV, foreign large value, and DLS, foreign small cap.

In addition, Merriman replaced some iShares with the equivalent Vipers, presumably due to their lower fees. In particular, IWD, IWN, and EEM were replaced with VTV, VBR and VWO, respectively. The difference in fees is small and the Vipers are less liquid. Further more, the Vipers have a short history and I cannot judge if they are better than the iShares in terms of tracking error even though the Vanguard mutual funds may be. So for now I would characterize the change as a matter of principle rather than a practical necessity.

The following table shows the current and target weighting in the portfolio. 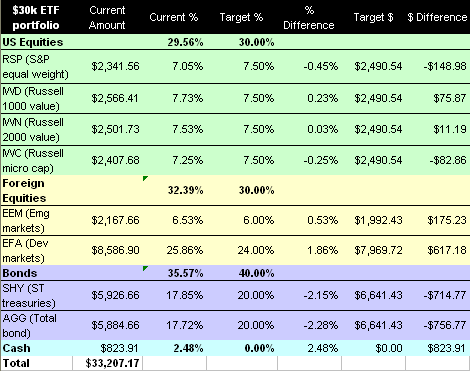 Here is a summary generated by Microsoft Money in which the %gain is calculated on a total return basis, i.e., including the dividend payments. The period of performance was Sept 8, 2005 to October 6, 2006. Interest earned was not included as this was only part of the account and I didn’t want to mix things up.

You can see the two bond funds were essentially flat after taking into account all the dividends, while all the equity ETFs made nice gains. Leading the pack were the two foreigh funds at over 20%. Double digit gains were also posted by IWD, IWN and RSP. Despite the hiccup in May, the foreign market was still the place to be last year. Overall, the portfolio gained 10.7% in 13 months, which is 8.9% annualized. Not bad considering the heavy fixed income component.

The 60/40 equity/bond split is too conservative for a young investor. If this portfolio were our main investment outlet, I would consider reducing the bond component to 30% and add 5% each of IGE (iShares GS natural resource) and GLD (gold) to make it a 10 ETF portfolio. More adventurous souls may further replace some bond component with REITs (ICF, IYR or the like) oil/gas income trusts, or other higher yielding instruments.