Ed Ross who just had a book “Forecasting for Real estate Wealth: Strategies for Outperforming Any Housing Market”, is saying that NOW is the time to buy and jump back into the housing market. It is my personal opinion that anyone claims such given the preponderance of evidence against him or her is just irresponsible. Yeah, housing prices always go up if your investment horizon is to hold it for more than 20 years. Oh no, 20 years was not a typo.

Home as an investment vehicle is no different than any other kinds of investment, subjected to considerations of risk versus return. The best advantage is obviously that it affords you the leverage power of 5X to infinite X (if you put zero down, or even doing 125% financing) without the danger of getting a “margin call” (until you cannot make the mortgage payment). As I have explained in “Leverage: the secret of making big money”, those are the major reasons of why your home could be your best investment. But the days for 100% or >100% financing are over. And you only get to do such deals until you get busted and fail.

But the leverage power that you get from investing/buying a home works both way, magnifying your percentage of potential return or loss. To make a statement of “home prices always go up in the long term” is just totally irresponsible. The only reason that it is true is because the inflation rate is always more than zero percentage in the long term. Obviously, inflation rate is positive because societies have gone away from gold standard to a fiat money system.

Now if we look at the most recent housing bubble occurred in Japan as an example, we will find that the prices have NOT recovered to the peak of 1991. In fact, prices in 6 largest cities have dropped 64% from 1991 to 2004. And interest rates have been cut to almost 0% and loan terms extended to 90 or 100 years without being able to stimulate the housing economy. If such declines in home prices can happen in a country where the lands on islands are the most precious commodity and population density is relatively high, then there is no reason that it cannot occur here in the United States.

While I don’t think US will follow the deflationary model of Japan, but rather Argentina’s inflationary track, housing market in nominal prices before adjusting for inflation is most likely to continue to fall towards 4th quarter of 2012. Certainly, my call on the bottom can be wrong, but at least I was intelligent enough to know that we are in the post-peak of housing environment back on August 4th 2006 (in the last paragraph of “Why Stock Markets Crash”).

My date of 4th quarter of 2012 is based on the following observations. First and foremost, the second major wave of mortgage payment reset is not over until the first quarter of 2012. 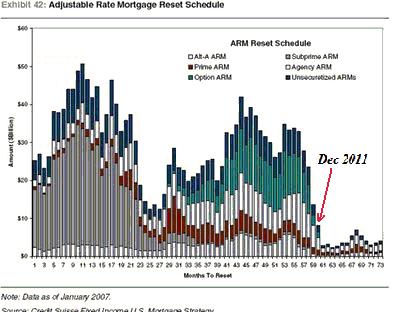 While the peak of the option ARM resets is at about mid-2011. Since option ARM holders can continue to choose to pay the minimum payment on their mortgage until right before their reset, I assume that the flood of REOs (real estate owned by lenders) won’t be in the market until 6 to 9 months after the first missed payment. With the number of the homes potentially going thru foreclosures and downsizing of the banks, I won’t be surprised that the foreclosure process will take a whole year. Therefore, the housing supply situation will probably be very bad in mid-2012 (1 year from the peak resets in mid-2011) until first quarter of 2013. If you add 6 to 9 months on top to the mid-2012 for the time to sell a REO, there will NOT be any real recovery until 1st or 2nd quarter of 2013.

For the people who are looking to buy, the major bulk of the price declines should have happened by 3rd/4th quarter of 2012 or earlier. I believe that there is still a potential 15% to 20% downside from the current prices. If you’re looking forward to invest, there is just no reasons that you should put your money in a potentially sinking boat.

Interestingly, from Martin Armstrong’s economic confidence model, the credit cycle probably will bottom near July of 2011, which is consistent with the above timeframe. The above date probably will coincide with a bottom in the financial stocks (or the stock market for that matter) will certainly occur first probably with a minimum lead time of 9 to 12 months ahead of the actual housing bottom.

With an inflation rate that is probably going to be higher than normal going forward, a low Fed rate will not be helping much on the mortgage rate either. For those housing bulls who think that a low Fed rate will come to rescue, they don’t understand that an initial teaser rate at 1% (while the long term rate was still at 4.5% or above) will most likely NEVER come again. Since long term rates will most likely go higher due to heightened inflaiton, mortgage rates will be higher too. That certainly won’t help the housing prices.